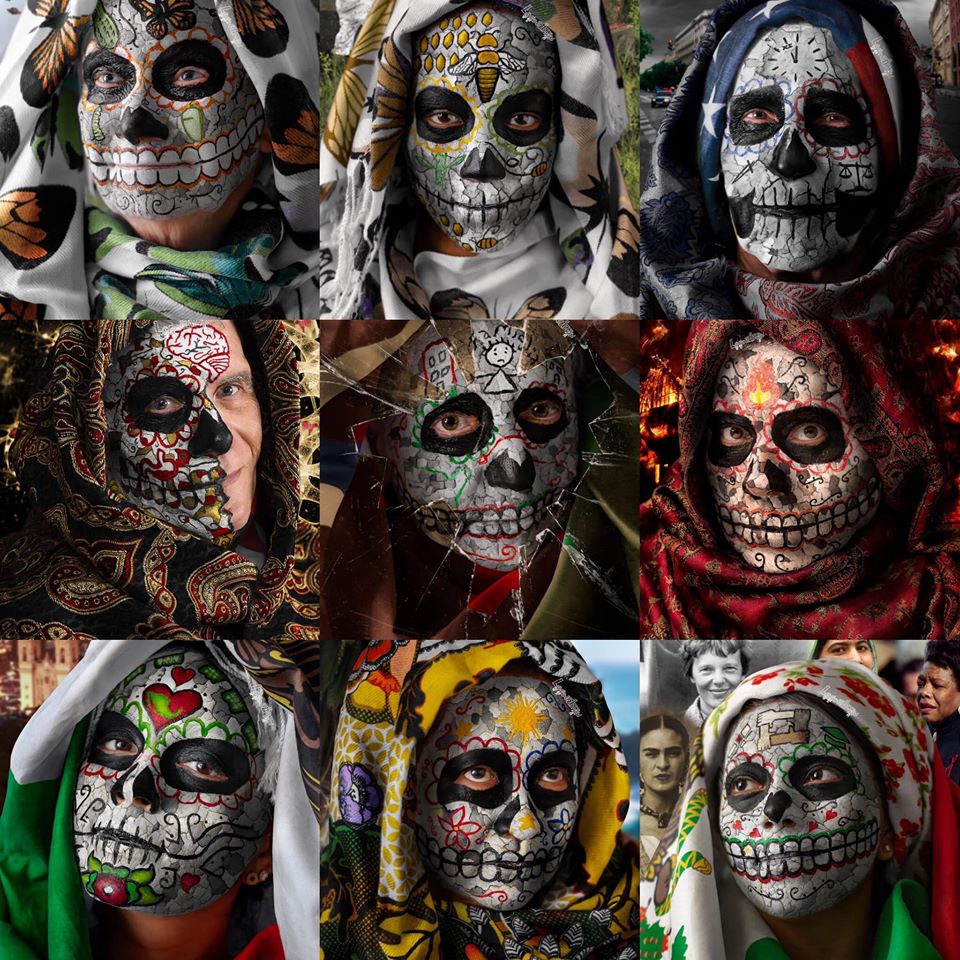 2019 - Christopher Lucero began his residency in West Chicago in 2019 and will continue to work in the community. His project, Calaveras of Chicago, has grown. He has featured 17 West Chicagoans so far and captured a bit of their life stories alongside these striking images. Check out all the stories and watch the transformations on his page. This project will continue into 2020 as Christopher completes 24 community members. 2016 - Juan Chawuk is a Tojolobal Mayan artist from Chiapas, Mexico, who is currently working in the United States as a visiting artist through the National Museum of Mexican Art. Juan has worked on mural projects and held exhibitions in Kansas City, Los Angeles, Milwaukee and Phoenix.  Juan worked on a mobile mural at 103 W. Washington Street, at the corner of Main Street and Washington Street from Monday, July 25 through Friday, August 5, 2016. The public was invited to visit his studio.  He also gave an artist talk on Wednesday, August 3, 2016 at 7:00 p.m.

Juan and his work were displayed during the West Chicago Family Art Night in downtown West Chicago on Friday, July 29, 2016 from 6:00 – 9:00 p.m. where art, music and dance performances were featured at 103 W. Washington Street, Republic Bank located at 101 Main Street, the West Chicago City Museum at 132 Main Street, and Gallery 200 at 200 Main Street.  Interactive art pieces were open for attendees at all locations.

Juan is being hosted by PMV through a collaboration with the National Museum of Mexican Art and the Mexican Cultural Center DuPage and is funded through the JCS Fund of the DuPage Foundation which supports the arts, particularly, music and visual art programs. 2016 - William Estrada is a Chicago-based artist and teaching artist who received his MA in 2015 in Art Education from the School of the Art Institute of Chicago. His community-based art has been featured throughout the City of Chicago, including his work as part of an extensive artist residency program at Telpochcalli Elementary School.  William was introduced to West Chicago at  the City’s annual downtown spring festival, Blooming Fest, on May 21, 2016. He took pictures of attendees as part of his Family Portraits project. He also attended West Chicago’s Railroad Days on July 10, 2016 with his Mobile Street Art Cart, a uniquely built “paleta” (ice-cream) cart that is filled with art supplies.

William and fellow artist in residence Juan Chawuk were featured on WGN Radio's Frank Fontana's Sunday afternoon program to talk about their work and the time spent in West Chicago. A two-part exhibit in 2015 by artist Diana Velasco was on display at West Chicago's City Museum, 132 Main Street. Part one is 1/2—Two Nationalities, which consisted of eight photographs of persons who hold dual citizenship with Denmark and another country. The second part was a series of photographs, which she digitally manipulated, that relate to the family history of Velasco.

Velasco was born and raised in Denmark by a Spanish father and a Danish mother. Her photographic work touches on the subjects of identity and relationships. She has studied both anthropology and communication.

Velasco was in West Chicago November 12 through 21, 2014 for a closing reception. She returned to West Chicago for a project during Blooming Fest in May 2015, titled Sense of Place. The photography project involved the memories of the community around local landmarks.

The traveling portions of this exhibit and artist-in-residency project are in collaboration with the Museum of Danish America in Elk Horn, Iowa and the Nordic Heritage Museum in Seattle, Washington. West Chicago collectors were invited to share their treasures with visiting artist-in-residence Marlene Klok for a special photo exhibit at the City Museum which ran Saturday, May 17, 2014 (during Blooming Fest), through July 2014. She was at the City Museum, 132 Main Street, during regular hours (Wednesday through Saturday from noon to 4:00 p.m.) to meet the public and photograph any collections brought in. Drop-ins were welcome, no appointment is necessary.

Klok who lives and works in Copenhagen – Denmark was a guest of not-for-profit organization People Made Visible, which partners with the West Chicago Cultural Arts Commission to bring international artists to the community.

Klok is a trained tailor and has a Master’s degree in fashion design from Designskolen Kolding. She has been a practicing artist since 2006, working in paper collage and craft, and most recently incorporating photography. She has participated in fashion and art shows in the Danish Embassy, Berlin – Germany, the Cumulus Conference in Saint Petersburg, Russia, the Spring Exhibition at Charlottenborg, Copenhagen – Denmark, and Freeark Gallery, Riverside Art Center, IL, USA. The West Chicago City Museum, in collaboration with People Made Visible, Inc.,  welcomed international Artist-in-Residence Irene Pérez to West Chicago August 25 through September 12, 2013. A native of Barcelona, Spain, Pérez was in the community working on her project “Setting Up House-West Chicago". She met with local residents to gather oral histories of how people see their homes, and the stories and memories residents have around the places they have called home.

The project evolved during the artist's residency, and the histories she gathered were incorporated into textiles she created.

As it came together, the project, Setting Up House-West Chicago, was displayed at the West Chicago City Museum during September 2013. Alongside the exhibit were West Chicago house histories, including some of the many homes that were relocated throughout the City.