With less than a couple of weeks before a visit from America in Bloom’s (AiB) national judging team this summer, a broken storefront window
at 103 West Washington Street’s Gallery 200, a nexus point of downtown West Chicago, became a topic of discussion at the July Cultural Arts Commission meeting. Concern about the unsightly board concealing and detracting from the creative vibrancy normally exposed through the large glass window sparked a brainstorming session among members. 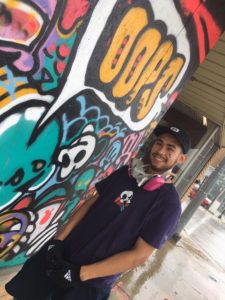 Enter Giovanni Arellano, a resident and current student at the College of DuPage, who several months prior had expressed interest in joining the volunteer Commission as a way to give back to his community. A chance meeting at Kindred Coffee Roasters brought Giovanni in contact with Commission member Heidi Kuharich and the two talked about Arellano’s interest in the arts.

While the window at Gallery 200 has since been repaired, AiB judges, thanks to a new artistic voice in the community, were greeted by a colorful montage of graphic shapes and figures that loosely tell Arellano’s version of the story. It was his first mural created with spray paint.

“This image illustrates the detrimental effect of a distraction. A single second is enough to cause a profound change and in this instance, it caused a mistake.”

However, he also goes on to say, “I leave no definition to my art. I let the audience around put their own to it based on what they see, how they see it, and interestingly enough – how they feel after seeing it. If there’s anything I learned in English class, it’s that symbols and metaphors alter your aspect significantly. I don’t really know what I’m doing when I draw, I just go along the way.”

Raised in West Chicago, Arellano attended Pioneer Elementary School, Leman Middle School, and West Chicago Community High School. He began drawing at age 5 and developed a distinctive style by age 14 when he also discovered skateboarding at the Reed-Keppler skate-park, a practice he plans to continue for as long as he says life lets him. Fiendsco, the name of his skateboarding team, as well as his amateur clothing design line and his art, is a play on perception. According to Arellano, “There’ve been times when people read friendsco, and then they read it again and realize it says fiendsco. In reality, not everything is what it seems and my art tends to reflect that.”

Arellano is grateful for the support of many people in his world, “My mom (Ma GG) raised me while my dad (pupé) showed me most of my ethics. My brother (J) and sister (Amaryllis) showed me most of the other foundational details I needed to know to be who I am today.”

In addition to expressing gratitude to others including God, Tia Nelly, Dan C, Leo, Jondal, Panchi, Nunu, Linda, Fiendsco Team and Heidi for pushing him to do better, and friends who are wearing his designs on sweaters in 90 degree weather, he sends a special message to his Pioneer elementary art teacher, Mrs. Rooney, “If you are reading this, please email me at made@fiendsco.com”, because “looking back at it, she practically sponsored me with sketchbooks.”

Arellano hopes to develop enough media to present in a future art show, next time inside Gallery 200, among the work of other talented West Chicago artists.