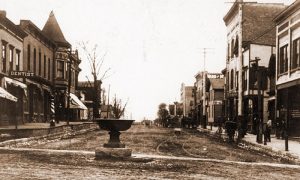 On October 14, 1897, the Woman’s Christian Temperance Union (WCTU) dedicates a drinking fountain at the intersection of what is now Main and Washington Streets.

The WCTU, founded in 1874, is the first mass movement of American women. These ladies don’t want the unavailability of clean drinking water to be a reason for men to quench their thirst with liquor.

A public waterworks is installed in 1896, yet there is “no place on the street for man or beast to find a drink of water.” In a railroad town with several saloons, women speak out about the evils of liquor because they are most often the victims of its abuse. This simple drinking fountain promotes water as the drink of choice.

Horses drink from the bowl while a central raised bubbler gives relief to parched human throats.

Twelve years later construction crews lay track for the new Aurora Elgin & Chicago interurban streetcar line and find that the fountain is directly in their path. Construction stops. By late September the fountain is moved closer to the north side of Washington Street, and clear of the intersection. Track laying resumes. 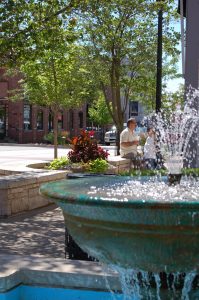 In the 1930s the fountain is moved to Galena and East Washington Streets, but its plumbing is not reconnected. Painted white, it becomes a flower planter. We are told that the fountain is “borrowed” for the 1963 Community High School prom, and then returned to its place.

In 1995 it is sent to a conservator for restoration. Microscopic inspection of the paint reveals that the cast iron fountain has an original painted faux stone finish. This deep green finish is restored, and the fountain is placed in a small park at 126 Main Street. Its 100th birthday is celebrated with great ceremony in July 1997.

Photos: Then and now, the WCTU Fountain is an iconic piece of public art in downtown West Chicago.