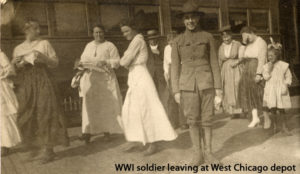 When we honor Veterans Day in 2018 it will also be the honoring of the 100th Anniversary of Armistice Day which brought an end to World War I on November 11, 1918. The Great War, which World War I was called, ended on the western front of the war through an armistice between the Allied nations and Germany that took effect on “the eleventh hour of the eleventh day of the eleventh month.” The War broke out in 1914, but the United States did not officially enter the conflict until 1917. In September of 1917, 188 men from DuPage County were drafted and headed to Camp Grant; 12 of those men were from West Chicago.

Life throughout the country and in West Chicago quickly changed. Meatless and wheatless days were instituted and war taxes were placed on amusements. Community organizations, many of which were led by women trying to do their part, raised funds and led efforts such as war gardens and sending our troops care packages. Women also stepped up and filled men’s places in a variety of jobs. A May 1918 West Chicago Press article reported that women had taken positions with the AE&C interurban train line, donning overalls, cleaning cars and even earning the same wage as men. Local drives were also held to raise money to ship the West Chicago Press overseas to our soldiers and sailors, providing them a piece of home in the form of the newspaper.

The Great War killed over 15 million, with at least half of those civilians, and wounded at least 23 million more soldiers. Four West Chicagoans paid the ultimate price during their service in World War I: J. Wesley Diebold, Elmer Hayward, Herbert Shadle, and Fred Voelz.

When the war ended West Chicago celebrated with an armistice celebration at the Bolles Opera House, which was located on West Washington Street. As our veterans returned home, banquets were held and forums were hosted to allow the returning men to talk about their experiences oversees.

Following the end of the War, the United States celebrated Armistice Day with the rest of the western world until 1954 when it was renamed Veterans Day. Congress voted to change the name to Veterans Day in June 1954 and President Eisenhower issued a proclamation explaining that the day should honor veterans of all wars, especially since by 1954 the United States had taken part in World War II and the Korean War.  The United States and European countries will honor the 100th Anniversary of Armistice Day at 11am on November 11, 2018, through a remembrance of the end of the first great war and a call for peace worldwide.