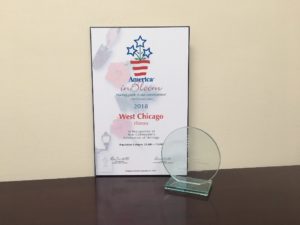 Top honors for the prestigious 2018 America in Bloom National Awards Program were announced at the annual symposium and awards celebration held in Lexington, KY on September 29, 2018.

West Chicago was the winner of the Best Community Celebration special award, one of 10 surprise awards announced during the symposium. West Chicago received an 8-star rating out of a possible 10 stars and received special recognition for its Celebrating Heritage. Linda Cromer & Rod Barnes, AIB judges, spent two days touring the community, meeting municipal officials, residents, and volunteers. Other communities in the 25,000 – 75,000 population category were Athens, OH; Decatur, IL; and Mansfield, OH.

All participants were evaluated on seven criteria: overall impression, community vitality, environmental efforts, heritage celebration, urban forestry, landscaped areas, and flowers. Additionally, they were judged on their community involvement across municipal, residential, and commercial sectors. America in Bloom is the only national awards program that sends specially trained judges to personally visit participants. In addition, each participant receives a detailed written evaluation that can be used as a guide to future improvements.

America in Bloom executive director, Laura Kunkle, said, “America in Bloom is helping towns and cities of all sizes achieve their potential. Every year our participants raise the bar, and the accomplishments and progress shown by this year’s group is again remarkable. These are, without a doubt, some of the best places to live in America.”

To date, more than 250 communities from 45 states have participated in the program and more than 22 million people have been touched by it. Registration for the 2019 national awards program can be submitted until February 28, 2019. Eligible participants include towns, cities, college and university campuses, business districts, military installations, and recognized neighborhoods of large cities.