The City of West Chicago extends its condolences to the family of Richard “Dick” Truitt who recently passed away on Monday, July 18. 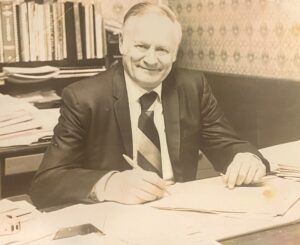 Truitt served as an Alderman and City Clerk for the City of West Chicago, and also served as the Mayor from 1971 to 1977. In addition to his community service, he also served in the U.S. Armed Services as a tank driver in the 3rd Armored Division, 83rd Reconnaissance Battalion, in World War II.

A significant accomplishment of Truitt’s service to the City of West Chicago was his advocacy on behalf of the property that is known as the West Chicago Prairie Forest Preserve. During his tenure as Mayor, Truitt, convinced the Forest Preserve District of DuPage and the City of West Chicago to purchase the property in 1979, which subsequently received the rare designation of a State Preserve. In 2006, an approximate one-third section was dedicated the Truitt-Hoff Nature Preserve, in honor of Mayor Truitt and Melvern Hoff, founder of the West Chicago Prairie Stewardship Group.

“I have known Mr. (Mayor) Truitt all my life, and his passing brings me much sorrow. He was truly an outstanding individual that made an impression on me at a very young age. He was a mentor to me. He will be greatly missed by myself, as well as the entire West Chicago community. I extend my deepest condolences to the entire Truitt family for their loss.”

In honor of Richard “Dick” Truitt’s memory, the City lowered its flags at City Hall to half staff the week of July 18.