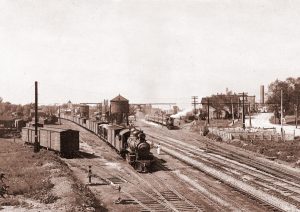 As part of the effort to attract industry, the community changed its name in 1896 to the Village of West Chicago.  Area businessmen, particularly Charles Bolles, reasoned that the new name sounded more cosmopolitan, and would help locate the town for prospective factory owners.  It was also at this time that the Village built a water works, thereby decreasing the threat of fire.

Several manufacturing plants such as the Turner Brick Company, Stimmel & Hook Pump Works and Roach & Brandt Millwork opened in West Chicago despite a depression in the 1890s.  As industry located in town and new jobs became available, the population increased.  By 1900 it reached 1,877, while in 1910 2,378 people lived in town.

In 1906, the village reincorporated itself as the City of West Chicago, with banker Grant A. Dayton serving as first mayor.

By 1909 yet another railroad built tracks to West Chicago,  the Aurora, Elgin & Chicago (later called the CA&E), an electric interurban, promoted commuter subdivisions along its route, hoping to generate passenger traffic.  High Lake, located just to the east of downtown West Chicago, was one such streetcar suburb promoted by this line. High Lake still exists as a subdivision of West Chicago, however the lake and the club house are gone.

In 1912 the C&NW built a new passenger depot (now the Wayne & Helen Fox Community Center, located at 306 Main Street) and an underpass, as well as the Wilson Street bridge over its mainline.  It moved its 1869 depot across Washington Street, converting it to a freight depot.  The 1869 depot still stands today at 119 W. Washington Street.

The multiple railroads also meant that a lot of migrant labor was brought in to the City. Recent immigrants to the United States were a large portion of this labor force. Box car camps were set up west of town and by the mid-1920s, Mexican immigrants began to dominate the railroad worker population and over the next few decades slowly moved from the company housing to their own homes in town.

In the 1930s, the town’s growth slowed dramatically and population actually decreased.  The CA&E interurban trolley abandoned their West Chicago branch in 1937. 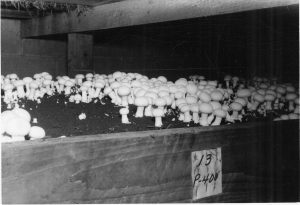 The City also saw the construction of a Campbell’s Soup mushroom factory farm following WWII. Prince Crossing Farm, as it was known, opened in 1947, originally with a Puerto Rican workforce that was quickly replaced by Mexican laborers. With a population of around 200, including workers and their families, Campbell’s ran a company town on the site until 1981, the last existing company town in Illinois. Many Latino families who came to work at Campbell’s and lived on the farm, eventually moved into town. This and the railroad box car camps started a large migration pathway to West Chicago, as the community became an initial home base for many migrants, with a majority of them coming from the Mexican state of Michoacán.

While civic groups remained active in community efforts during the 1970s and 1980s, governmental bodies assumed more of a leadership role.   In 1972, the West Chicago Park District was formed.

The West Chicago Prairie was established in 1979 when the City and the Forest Preserve District of DuPage County purchased land on the west side of town, part of which had been the former C&NW Stockyards.  The Prairie has over 300 acres with 600 native plants and animals, one of the most biologically diverse sites in northeastern Illinois.

In 1981 the new West Chicago Community Center, Inc., a not-for-profit group acquired the 1912 C&NW depot for use as a community center.  It was dedicated in 1983, after many cash and volunteer labor contributions.  It is now the Wayne & Helen Fox Community Center. 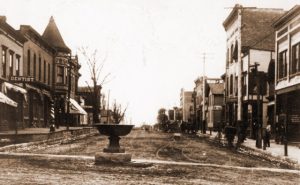 The 1990s brought many improvements to the City.  In 1995 Main Street underwent construction, with brick sidewalks, historic lighting and a fountain plaza added to house the 1897 Woman’s Christian Temperance Union fountain; part of the renovations were done for the filming of “Reach the Rock,” a John Hughes film.  The Turner Junction Historic District was formed in the downtown area.  The same year the Park District built the Prairie Oaks Family Aquatic Center at Reed-Keppler Park.  A nine-mile addition to the Illinois Prairie Path, the Geneva Spur, connected West Chicago to this bike path.  The population of West Chicago grew, thanks in part to some of these improvement from 14,796 in 1990, to 23,469 in 2000.

As of 2010, the population was 27,086 residents, with over half being of Latino descent. The community is still connected to its railroad roots, with much industry still located along its lines. Much of the historic downtown remains and is protected through the West Chicago Historical Commission’s Turner Junction Historic District. Many of the stately homes built by founding families are also preserved in the East Washington Residential Historic District.